"In terms of insolvencies, the year 2021 continued to be influenced by special regulations," comments CRIF Germany Managing Director Dr. Frank Schlein on the current figures. This is because: the obligation to file for insolvency for over-indebted companies as a result of the Corona pandemic, which had already been suspended until the end of 2020 at the beginning of March 2020, continued to apply until the end of April 2021 for companies for which the payment of the state aid payments provided for since November 1, 2020, had not yet been settled. In addition, there were exemptions for companies that had suffered damage from heavy rain or flooding in the summer of 2021.

"The war in Ukraine will fundamentally change the geopolitical and economic environment, especially for Europe. The economy in Germany will be affected by significant negative impacts. The sanctions against Russia, for example, will have negative consequences for supply chains and for the export-oriented German economy. We therefore expect corporate insolvency figures to rise in 2022. Due to the dynamics involved, we are currently unable to assess the magnitude of the impact on insolvency activity in Germany," says Schlein.

The amount of damage caused by corporate insolvencies increased in 2021 despite the falling number of cases. Insolvency losses totaled 48.3 billion euros last year. Compared with the previous year, this is an increase of 9.5 percent (2020: 44.1 billion euros). On average, therefore, bad debt losses amount to just under 3.45 million euros per insolvency. Several collapses of economically significant companies are responsible for this sharp increase.

The fewest company bankruptcies in 2021 were in Brandenburg and Thuringia, with 31 insolvencies per 10,000 companies.  However, comparatively few companies also had to file for insolvency in Bavaria (32).

Company insolvencies fell in all German states in 2021. Brandenburg (down 24.4 percent), Saxony-Anhalt (down 19 percent) and Rhineland-Palatinate (down 18.2 percent) led the way. 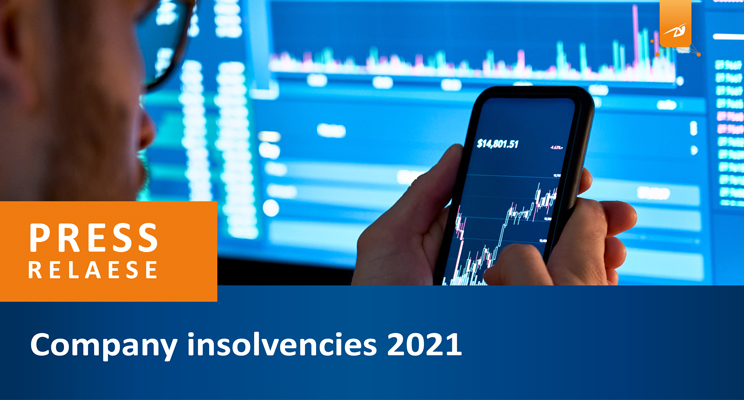